﻿﻿﻿ How to Install Connectors to PVC Lay Flat Hose? - Goldsione

How to Install Connectors to PVC Lay Flat Hose? 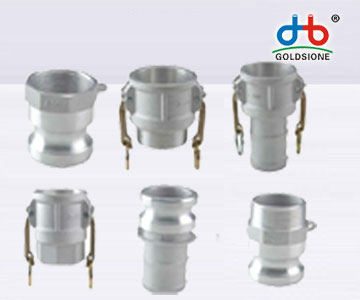 PVC lay flat hose is often used in water transmission and drainage. Do you know the types of lay flat hose connectors and the precautions for installation and use?

Take the 3-inch aluminum alloy connector as an example, the diameter is 80mm, and the working pressure is generally 6-16kg. It can be equipped with 8-type high pressure, 10 type lay flat hose and 16 type lay flat hose. Generally, the connector of watering hose is a supporting clip, which can be bought by hardware stores and hose manufacturers. Yuze manufacturers suggest to buy matching pressure connector, not easy to leak, so that irrigation more labor-saving.

The agricultural buckle is the most important connecting thing between the lay flat hoses. 1. Connect the internal buckle interface: the buckle claw should be inserted into the chute and then screwed in place clockwise. When connecting the agricultural hose, it is also necessary to straighten the hose to prevent the agricultural hose from twisting and detaching the connector.

2. The connector should not be too tight or loose during installation, and the force should be moderate to prevent wire sliding. The anti-skid pad of the connector must match the thread to prevent water leakage.

According to the working pressure of the water pump and the use scenario, the model of the lay flat hose interface is determined. When selecting the general irrigation scenario, we can directly use the agricultural plastic interface or the ordinary aluminum interface. If the use scenario of the water hose is more complex or the working pressure ratio of the matching water pump is larger, we need to choose the high model of die-casting connector or casting connector.

If you want to work efficiently, you should not only choose high-quality hose, but also the hose connector, so as to avoid leakage and pipe burst in the operation.

The previous article：Congratulations to Ms. Chen getting the honor of outstanding staff in 2020
The next article：How to Connect Your Lay Flat Hose To A Camlock Fitting?
﻿