Although the general cheap gas hose is also processed by the PVC material, also known as PVC gas hose, which also has braided layer, but the service life, appearance, smell, compression level, tensile strength, working pressure, etc. are significantly different.
First smell, no matter, the first smell of the smell, this odor is made from the production of PVC material in the polyvinyl chloride containing polybrominated diphenyl ether emissive, PBDE on human and natural environment Of the increasingly serious harm, its smell has a strong persistence and strong fat-soluble, the human liver and nervous system damage, while interfering with thyroid endocrine, easily lead to cancer. Now the United States and Europe and other countries in 2003 and 2004 has issued a document to prohibit the manufacture of such a tube, gas hose manufacturing must meet the ROHS and REACH standards in order to use.
Its second compression effect is poor, poor bonding strength, easy to stiff hard, hand holding like a stick, easy to fold; some gas hose although the winter feel very soft, is the tube production with cold plasticizer, plastic Agent is phthalate, the human body is a chronic poison, likely to cause liver and kidney function decline, blood red blood cells, with mutagenicity and carcinogenicity.
The three braid is made of inferior polyester material, the inner layer, the outer layer and the middle braid layer is not strong, it is easy to peel, which will affect the working pressure and service life. 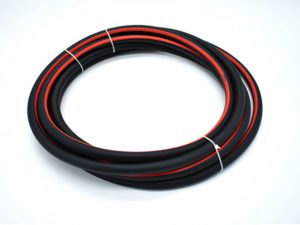 The previous article：Teach you how to distinguish the quality of PVC steel wire hose
The next article：How to maintain 3/8“ PVC Air Hose?
﻿