In order to create a healthy and positive corporate culture, enhance collective cohesion and enhance the friendship between colleagues, and let everyone get closer to nature, broaden their horizons and cultivate their sentiments, our company organized two-day activities of Yantai Moon Bay East Battery, Small Trestle Bridge, Yangma Island and Kongtong Island Leisure Island on August 3, 2019. All the staff went to Yantai Changdao to experience it. There is also a beautiful legend about Yangma Island. It is said that when Qin Shihuang visited Yangma Island in the east, when he saw the abundant water and grass on the island, he spread the idea of raising warhorses here and named the island Royal Yangma Island.
Then we visited Kongtong Island, which is the nearest island to Yantai City. There are not only natural scenery such as Yinsha, Pink Bay, Caishi Beach, Yuanbao Island, Swan Island, but also historical and cultural relics such as Primary School of the Republic of China, Seagrass House, Centennial Lighthouse, Lianli Ancient Tree and Holly Corridor. After the tour, our company also joined in the expansion of the game link, prepared a rich prize, the purpose is to increase the team cooperation ability of employees, so that employees can experience the importance of the team in training, to work in a more full state of mind, to serve customers! 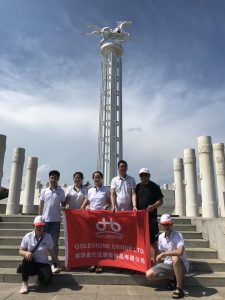